This is a brand new adventure series that takes its inspiration from the classic adventure books of the late 19th and early 20th century. Arthur Conan-Doyle’s “Lost World”, Jules Verne’s “20.000 Leagues Under the Sea” and Rider Haggard’s “King Solomon’s Mines” were  some of the books that we loved reading when we were young (a long time ago!). We’ve taken these and changed and updated them to the 1930s.  Along the way we’ve picked up bits of Indiana Jones, James Bond, Alex Ryder and Hollywood blockbusters and added them to the mix. As a reviewer says “I would love to see this on the big screen.” So would we!

‘With lots of thrills, spills and world survival hanging in the balance, young Luke Challenger is the only one capable of sorting it all out.’  The Bookseller

Someone is trying to kill Luke Challenger! Being killed by a Nazi glider pilot is not the way he wants to end his life. And when his mother goes missing in the deepest Brazilian jungle, it’s up to him and his friend, Nick, to track her down and save her from the mysterious and sinister Sons of Destiny. Can Luke find his mother in the dinosaur-inhabited, Lost World? And if he does, will he also manage to save the world from the evil plans of the Sons of Destiny?

The 2Steves say… “This book is a mixture of Indiana Jones meets James Bond meets Sherlock Holmes with a great big splash of Hollywood blockbuster thrown in for good measure!”

Other people say… “A roller coaster adventure that will grab readers from the dramatic dare devil opening and hold them gripped throughout.” 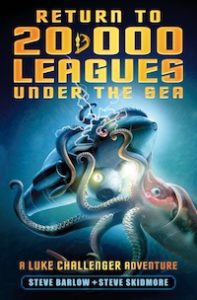 Luke has discovered that the wreck of Captain Nemo’s legendary submarine, the Nautilus, is lying at the bottom of the Indian Ocean. The sub’s engines hold the key to atomic power – a secret that the deadly Sons of Destiny will stop at nothing to steal. Can Luke brave the terrifying creatures of the deep to save the world from his deadly enemies?

The 2Steves say… “This book combines Conan-Doyle with Jules Verne! It is the second in our Challenger series and we’ve tried to up the action and make Luke’s enemies even more terrifying!”

Other people say… “A roller-coaster of a read, with adrenaline-charged action and plenty of plot twists and turns to keep you on the edge of your seat”. 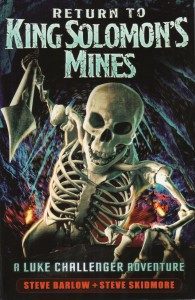 Luke’s been expelled from school and sent to Africa to keep him out of trouble – but trouble has a habit of following Luke wherever he goes. Now the terrifying Sons of Destiny are there, searching for a spear of invincible power, hidden in the fabled King Solomon’s Mines. And if Luke doesn’t stop them, world domination will be theirs.

The 2 Steves say…“The third book in the series is full of twists and surprises! Even our editor didn’t spot the big twist at the end! We’re not saying what it is, you’ll have to read it yourself!”

Other people say…“Return to King Solomon’s Mines is fiction for boys aged nine and over at its very best. Exotic locations, super heroes, brilliant baddies and daredevil adventure … who could ask for anything more?”