“You’re not a superhero, you’re a MEGAHERO!”

YOU are the incredible shape-shifting MEGAHERO, fighting against a host of mad, bad and dangerous villains!

With the aid of your super-computer, PAL, and your MEGASHADE sunglasses, you can turn into ANYTHING (except when PAL crashes, or you have a bad wi-fi signal or PAL doesn’t understand you!) but hey, that’s technology for you!

There are six villains to defeat! 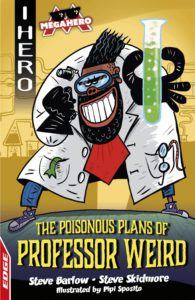 The Poisonous Plans of Professor Weird

Professor Weird has released toxic clouds that cause hair to grow out of control.

Can you stop his hair raising scheme? 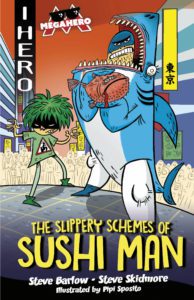 The Slippery Schemes of Sushi Man

Something fishy is going on! Sushi Man and his side kick, Wasabi Boy, are up to no good in Japan.

Can you reel in the slippery villains? 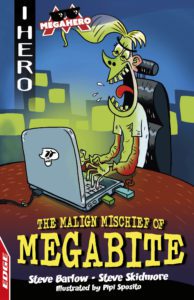 The Malign Mischief of Megabite

Megabite is really bugging you!

You’ve got to get into cyberworld and stop the teenage hacker before Megabite’s virus destroys the internet? 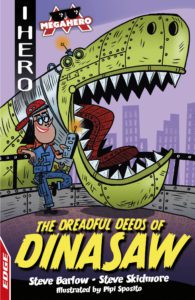 The Dreadful Deeds of Dinasaw

Robot dinos are loose on the streets!

Can you stop rogue scientist, Dina Saw before her terror-saurs slice up the city? 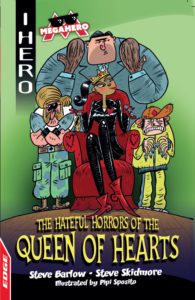 The Hateful Horrors of the Queen of Hearts

The Queen of Hearts is up to her tricks!

Can you play your cards right and deal with the Queen and her pack? 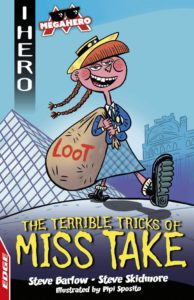 The Terrible Tricks of Miss Take

Somebody is pinching a whole bunch of priceless treasures.

Surely it can’t be the sweet looking group of schoolkids, could it?

It’s up to you to find out and stop them!