You are a member of a special forces naval unit. You are recruited by ORCA  – the Ocean Research Central Agency – a top-secret unit for a mission to save the Earth from the evil plans of Triton, the King of Atlantis.

The Atlanteans have broken out from under the Ocean floor and are determined to destroy all of mankind.

Only you and your super-sub, the Barracuda, stand between them and total destruction! 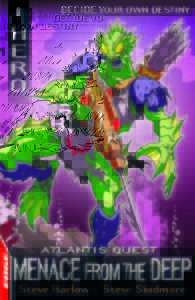 Book 1 – Menace from the Deep

Triton, the evil King of Atlantis, is sending his forces from a lost underwater city to the surface. He wants to take over Earth! Your quest is to defeat Triton, but first YOU must battle Hydros who is planning to attack a secret base on a volcanic island. 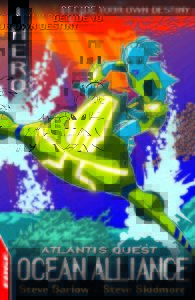 With Shen, a Mer, you must use the upgraded Barracuda super-sub to search for the Atlantean fleet led by Commander Hadal. You have to defeat the enemy fleet before it can launch a deadly attack on the Earth. 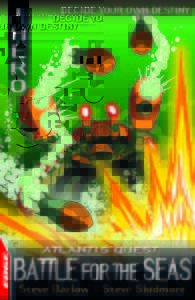 Book 3 – Battle for the Seas

Shen’s home city is under attack from the Atlantean forces led by General Tempest. You have to help the Mer people defeat the Atlantean attack before they can destroy the city. The problem is that they have a cloaking device – how can you defeat an enemy you can’t see? 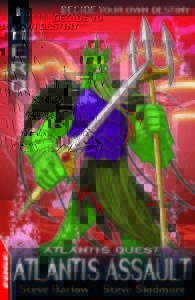 The final battle to save Earth takes place deep under the sea floor. With the cloaking device installed in the Barracuda you take the fight to Triton, but you must get to the heart of Atlantis to defeat him. And how will you stop his invasion force?