There are 14 titles in our iHero Immortals series.

This series features a revised interactive structure in which the hero never dies! It’s perfect for the younger reader. The fantastic artwork for the first 8 books has been created by the brilliant Jack Lawrence! Thanks Jack!

Judit Tondora has taken up the artistic challenge for the most recent titles and she’s done a great job. Thank you Judit! You are the world’s greatest animal tracker. When a huge sink hole appears and hungry dinosaurs crawl out of it, there’s only one person who can save the world. YOU! You are an apprentice witch. All of your classmates have been trapped by evil magic. Mother Oak believes you have the power to save them all! 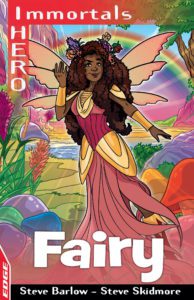 You are a captain in the fairy guard.

When an evil elf called Torkin steals the Golden Casket in which the magical rainbow, Queeen Gloriana calls on you to find it and bring it home safely before Torkin can destroy it. You are a skilled Samurai.

At the command of a blood-thirsty warlord, assassins have ambushed your adopted father, Lord Oda. You must avenge him, no matter the cost! You are a Knight of the Round Table.

Evil sorceress, Morgan Le Fay, has kidnapped King Arthur. It is up to you to find and You are on a quest across the seas.

Redhand Radcliff is out to kidnap you and steal your father’s place as pirate chief. To escape his clutches you must fight for what is right and become a PIRATE QUEEN You are a Warrior Princess. You rule over the Kingdom of the North, a land of ice and snow.

Your land is kept frozen by the magical Ice Diamonds. By keeping these valuable diamonds safe, you ensure that your people’s way of life can continue.

But when Professor Mekanik attempts to steal the Ice Diamonds you have to stop him. 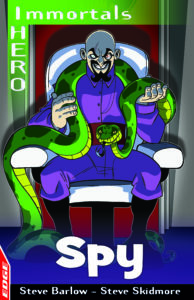 You are a spy codenamed Scorpio. Arch-villain Sebastian Mammon has seized control of laser satellites orbiting the Earth. He’s going to destroy key capital cities, starting with London and only you can stop him… You are a Ninja, trained in stealth and secrecy. You live in Japan, which is ruled by the Emperor and his war-chief, the Shogun.

When your village is attacked by a warlord called Raiden, only you can stop him. 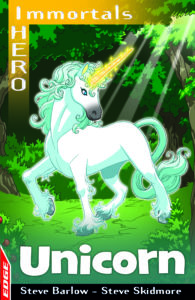 You are Sapphire, a magical unicorn who lives with two other unicorns, Carmine and Emerald, in Rainbow Land.

Your country lies next to The Land of Shadows, a kingdom ruled by Empress Yin Yang. Her realm has no colour: everything is black and white. She wants to steal all the colour from your world and she’s captured your friend Carmine. You have to find a way to stop her wicked plans! YOU are the last of the Dragon Warriors – human beings who, by reciting a certain spell in a Sacred Grove, can take on the form of a dragon. For centuries your land has been at peace, and only your family has continued to teach dragon-lore to its children. But now a threat, long thought extinct, has reemerged – barbarians from the Iron Mountains under a new, warlike leader, Grull, are ravaging your land. You have to take dragon form to defend your people; first from goblin riders on 3-headed wolves, then from barbarian clansmen riding taurogriffs, then grey knights riding scorpion-tailed manticores – and finally from Grull himself and his elite guard mounted on rocs, the most powerful flying creatures in existence! 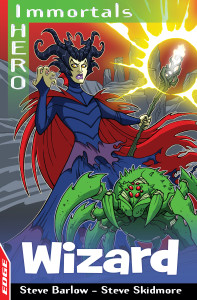 YOU are a young wizard who must rescue the prince & heir of your kingdom. He has been kidnapped by witch who threatens to kill him if the kingdom is not handed over to her. Your elderly master is too ill to travel – you must find the prince! Travel through a forest of talking trees and the Caverns of Eternal Night to defeat the witch. YOU are a princess of the mer-folk. You discover that another undersea people, the Tritons, have given a bloodthirsty crew of pirates the ability to survive underwater so that they can make sneak attacks on surface vessels and disappear below the waves to thwart any pursuit. What’s more, the Tritons have now formed an alliance with the pirates in order to invade your kingdom. While your people desperately hold back the invaders, you must evade the triton cavalry and their hunting creatures, selkies and merlions, and escape the terrible sirens in order to carry a message to Tethys, Lady of the Sea, asking her for aid. YOU are the superhero “Olympian” – with mega strength and magic weapons. Your nemesis Doctor Robotic has created a robot army that captures people and puts a mind-controlling electronic collar round their necks to turn them into mindless automata. You must thwart Doctor Robotic’s plans. You have to fight an increasingly powerful selection of robot vehicles, flying machines and warriors, concluding in a fight with the Doc in a powerful exoskeleton.